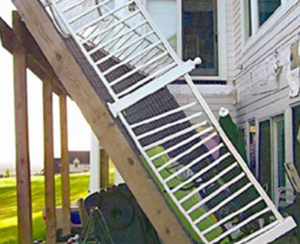 “ But They Came Highly Recommended by my Neighbor! ”

Well damn, you’re still here?  Excellent!  Let’s open the door by discussing the players normally involved in any significant home project.  First, I’d like to bring your attention to codes and codes enforcement.  Some people think this is a nasty phrase. I mean, “code” is a 4-letter word, right?  Codes are good; contrary to some idiots who want to limit fascist interference in our lives! Just kidding, about the Fascist stuff I mean. I stand by the idiot part. Codes have been born out of need. They are to protect the health, safety and welfare of the public. Honest to God. You can look up the origins of codes but there are several historical accounts. The one I’ve heard the most is the most plausible recollection of the first building code. It was a fire code that required an outside stair on any wooden building above 1 story tall. It became law following a hotel fire that resulted in loss of life. The point is that it was born of necessity. Makes sense. In the late 1970’s, there was 1 primary residential code nationally called the MPS (Minimum Property Standard). As a designer, I was a licensed inspector and authorized to seal drawings for compliance.  It was created to enforce (very loosely) minimums for home construction being financed with federal backing.  This code was rather rudimentary and truly enforced minimums. In Florida, most residential permitting and subsequent codes oversight was done on the municipal level.  These municipal residential codes ultimately became rather substantial with a strong focus on structural guidelines. However, the SSBC (Southern Standard Building Code) had been growing as one of the more authoritative criteria in the nation since 1965. It is my understanding that this code platform is the core of the current IBC (International Building Code) of today. The IBC and the IRC (International Residential Code) are the authoritative criteria for building in America today. These are incredibly comprehensive documents and cover virtually every aspect of construction today in minutia. They are remarkably (mind-numbing) complex, as any of the structures they cover are.  Truly, these books may be the leading cause of alcohol abuse in construction.  Not really but it sure feels that way.  As a Catholic, we breeze right through with a couple shots of Jameson. Anyhow, each new iteration of the code addresses changes in necessary topics like new materials, methods and technologies. They are an endless work in progress.  Now, keep in mind the word “code” which I’ve tried to call a little attention to.  It means MINIMUM!  These documents, as complex as they are, are to regulate MINIMUM compliance requirements.  Again, born out of necessity because ‘professionals’ will consistently fail to meet the minimums if you leave the door open!  Der.  These codes are to prevent you from being squashed, drowned, blown up, toasted, yada, yada, yada….by your own house.  Not a bad thing ya’ think?  Now, if you still subscribe to the, “They’re just trying to take my tax money and waste it!” crowd; you’re possibly an idiot.  Frankly, the cost of permitting is significant because the expense of codes enforcement is significant.  Even then, municipalities are often understaffed with qualified professional inspectors.  This ain’t easy stuff and even then, they simply can’t catch everything.  I’m just sayin’; You want these folks looking at what is being done on your behalf.  Trust me.

Over time construction has seen a number of technologies come and go.  For example, in the late 60’s and 70’s we saw the introduction of “Fire Retardant Lumber”. Sounds like a great idea, right? It was, in theory. We just didn’t realize that the chemical treatment used also seriously weakened the wood. Especially in high-heat conditions like attics in the summer. Rooves fell in. Trusses would break.  Not good. So, code said Fire Retardant Lumber had to go, or change. Wise. This happened with the early emergence of flexible plumbing pipe. Started great; ended poorly. Code has followed the rise and fall of numerous technologies; all the while trying to protect the consumer and the public in general. So, when you hear some Neanderthal bitching about code, you have permission to snot-slap them. Consider it a public service. There are idiots in the world that are unaware of their condition. Perhaps if they knew they could begin on the road to recovery. Besides, smacking a jackass can be cathartic. I am kidding…sort of. I don’t advocate violence, but I do get annoyed when people trash a system that is an element of this nations better qualities. Again, the word “code” is almost code in itself. Like I said, the better word is “minimum”. Code simply enumerates and enforces minimums. So, when you hear a builder proudly expressing that they build to code, don’t get too excited. Whoever stood on a podium and expressed their strict adherence to the least society will accept? Not a proud moment. The issue is this, codes are good. Very good. Building codes save lives every day and creates a level of safety that has come to be a world recognized standard. Damn people, it’s time to sing the anthem!

So, in summary, if you have a permittable project and the process is a little byzantine, suck it up and jump through the hoops.  It’s a survivable annoyance to protect you and those you love.  In fact, hug your inspector.  People treat them like they are Satan’s spawn and they’re just doing a truly thankless job.  Okay, don’t hug them.  They are a little cranky usually because of overwork and crappy receptions.  Maybe some cookies wouldn’t hurt.  Just sayin…. 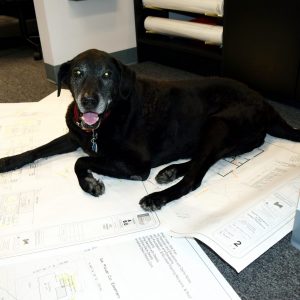 Ambassador Emeritus
Passing in Dec. of 2017, Nemo was Habitations’ oldest associate with over 91 (dog) years at his post. Nemo began his tenure with the company as a security guard at the age of 7 (49).  As the years passed, his ambition and loyalty never went unappreciated or unnoticed. Nemo held his position as Head of Security and ultimately rose to Director of Quality Control.  A position he held until the age of 98. Nemo rejected retirement and was always seen in the office reviewing plans and protecting the staff from a stream of threats to include Fedex drivers, Postal workers or UPS drivers. One of his favorite activities was clients reception and warming their feet during consultations. The office intensely feels his absence and misses the presence of floating dog hair, dog beds and the calming aroma of kibble.  There is truly a void in our midst that cannot be filled.